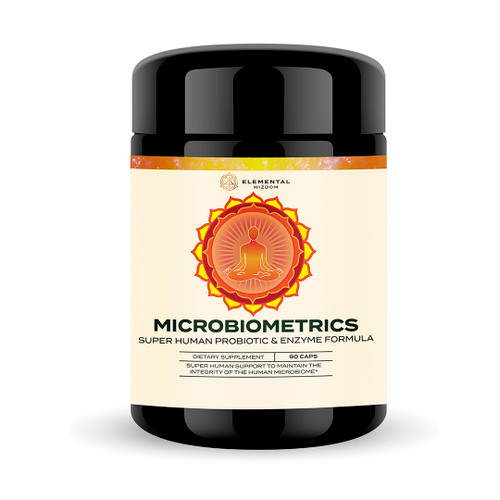 Elemental Wizdom's Microbiometrics are an effective blend of prebiotics, probiotics and enzymes specially formulated to support the balance of intestinal microflora and yeast organisms.* Beneficial for:

Without the proper balance and activity of these beneficial bacteria, the digestive system and the immune system will not function optimally. Many organisms flourish under stress of the modern lifestyle diets, hormonal imbalances, excessive sugar consumption, environmental pollutants, emotional imbalances and medicines, can disrupt the balance of microorganisms in the gastrointestinal tract. Intestinal and urogenital microflora play a central role in maintaining the health and well-being of humans.*

Proteases, turn out to be an excellent therapy to use against a virus, working on several levels. Many viruses are surrounded by a protective protein film, something a protease enzyme can digest away. Eliminating this coating leaves the viruses unprotected and vulnerable to antivirals and destruction.*

Chitosanase is a unique and powerful enzyme that supports the breakdown of chitin, an important part of the structure of cell walls. Cellulase enhances this activity by supporting the break down of the cellulose component of cell walls.*

Bacillus coagulans is a type of bacteria. It is used similarly to lactobacillus and other probiotics as "beneficial" bacteria. People take Bacillus coagulans for diarrhea, including infectious types such as rotaviral diarrhea in children; traveler's diarrhea; and diarrhea caused by antibiotics. Bacillus coagulans is also used for general digestion problems, irritable bowel syndrome (IBS), inflammatory bowel disease (IBD), Crohn's disease, ulcerative colitis, a bowel disorder called Clostridium colitis, excessive growth of "bad" bacteria in the intestine, and infection due to the ulcer-causing bacterium helicobacter pylori.*

Some people use Bacillus coagulans to prevent respiratory infections and ramp up the immune system. It is also used to prevent cancer or the formation of cancer-causing agents. There is also some interest in using it as an additive to vaccines to improve their effectiveness.*